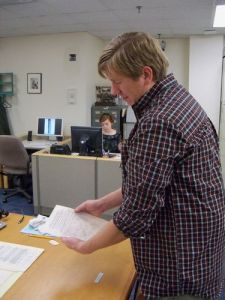 One of the issues I encounter somewhat frequently when doing research on New Deal archaeology is the conflation of all work relief archaeology, regardless of funding agency, with WPA archaeology.  This conflation is done by both historians of archaeology, and those who recall (often, but not always, fondly) their participation in federally funded archaeology during the Great Depression.  The WPA (Works Progress Administration at first, later the Work Projects Administration) was the largest source of labor and funding for work relief archaeology, but certainly not the only government program that invested in our nation’s heritage during the 1930s.

In fact, the WPA was a bit late on the scene when it began funding archaeological investigations in the spring of 1935.  Some of you may know that New Deal archaeology began in 1933 with FERA (Federal Emergency Relief Administration) funded excavations at Marksville Mound in Louisiana, followed soon by CCC (Civilian Conservation Corps) and CWA (Civil Works Administration) archaeology. FERA and the CWA were short-lived programs, but the CCC supported archaeology until the beginning of World War II.  After the WPA itself was started, this program was soon joined by the NYA (National Youth Administration).

Uncritically lumping FERA, CWA, CCC, and NYA investigations under the WPA rubric might seem innocuous enough, but it makes it difficult for researchers like myself who are trying to learn more about the many New Deal archaeological programs carried out across the US–and who are trying to make modern scholars aware of their continuing research potential.  One can’t begin to learn more about the many obscure work relief projects, if one does not know which relief agency funded the work.  This has been one of the biggest challenges with developing my GIS of New Deal archaeology projects (for details on this effort, see http://www.archaeologybulletin.org/article/view/bha.2116and http://onlinedigeditions.com/publication/?i=70732). But, it is a fun challenge!