The Great Depression was a challenging time for museums and other places of cultural heritage and many might have shuttered their doors forever if it were not for the coming of the New Deal.  New Deal programs provided a lifeline for museums in a number of ways, including an expanded labor force that cataloged and cared for archaeological collections that had accumulated from earlier museum expeditions. Stephen Nash (2013) has recently documented how the Field Museum of Natural History in Chicago, Illinois, benefited greatly from New Deal labor–but also how New Deal programs shifted the gender balance of the museum from largely female employees before the Great Depression to primarily male employees during the New Deal.  I recommend Stephen’s chapter in Shovel Ready for more on how the New Deal affected the Field Museum and its legacy.

1930s logo of the Southwest Museum

My focus here is on the Southwest Museum in Los Angeles, California, a once venerable institution whose future is uncertain.  I have a special fondness for this museum, as I interned and volunteered there for two years while an undergraduate student at nearby Occidental College.  I also had my first paid archaeology job documenting their collections in the summer before I headed off to graduate school.   What has prompted this self-reflection is the unexpected purchase of 1930s-era copies of The Masterkey, the slim journal of the Southwest Museum, from the Archaeological Society of New Jersey while attending the Middle Atlantic Archaeological Conference, held in 2013 at Virginia Beach, Virginia–on the opposite coast of the U.S. from the Southwest Museum. 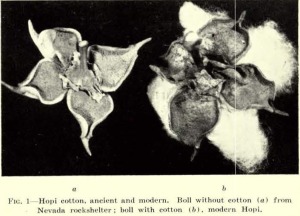 archaeology in Nevada at the so-called “Lost City” but details on these excavations have been hard to find (Harrington 1933, 1934a).  The Masterkey, as far as I can determine, is not indexed anywhere. Even if it were, details of M. R. Harrington’s frantic work with Civilian Conservation Corps (CCC) crews to excavate Puebloan sites before they were inundated by the waters of Boulder (now Hoover) Dam would likely not show up, as they were usually provided in the prosaically named “Report of the Curator” (1934b,1935a,b,1937c,1937d,e). Technically speaking, Harrington was not an employee of the Southwest Museum while leading the CCC excavations, but rather was on leave from the museum.  This arrangement apparently satisfied the Southwest Museum’s stated goal of not receiving any direct government support.

The Southwest Museum did directly benefit from New Deal programs, however. The Museum obtained collections from the “Lost City” excavations and also received material from the Smithsonian’s Civil Works Administration excavations at the Buena Vista Lake site in Kern County, California (Masterkey 1940).  And, visitors to the Southwest Museum benefited from the Federal Arts Project, a New Deal program administered  by the National Park Service (Harrington 1936a,b,1937b,f).  In exchange for providing space to host the Federal Arts Project, the Southwest Museum was given a copy of every diorama, painting, or other exhibit material that was being produced for interpretive centers in the region. Harrington (1937f:165) noted that these included:

…. Among the things falling to the Museum’s share were an excellent diorama of Blackfoot Indian life and two miniature models showing early man in combat with animals now extinct. Also in the line of sculpture we have correctly costumed miniature figures, on the scale of two inches to the foot, of a man and woman from each of .a dozen western tribes; also a Miwok man and woman on a scale of three inches to the foot, and two men, one Apache and one Pima, on a scale of four inches

The Federal Art Project operated out of the Southwest Museum from April 1936 to July 1937, with up to 32 employees at the height, but only 18 when the project ended. Hopefully, in a future post, and with some assistance by archaeologist James Snead, I’ll be able to post pictures of the dioramas–particularly of the battles with extinct animals!

7 thoughts on “A New Deal for the Southwest Museum, Los Angeles, California”