The official state agency in charge of preservation in Pennsylvania, the Pennsylvania Historical Commission (today the Pennsylvania Historical and Museum Commission) decided to hire Harvard Ph.D. student Francis Cresson to write up the results of the Somerset County WPA excavations of Monongahela villages, excluding those in Mary Butler’s (1939) original formulation of the Monongahela Culture concept (Means 2002, 2008, 2010). The original WPA lead excavator on the sites in Somerset County, Edgar E. Augustine, was considered not up to the task of completing the report, although he did help with preparation of maps and analyses of artifacts. Cresson completed a draft of the manuscript on the Somerset County WPA excavations by 1942, but was drafted to fight in World War II, and never finalized his report–in fact, he did not return to archaeology after the war. Cresson was contacted in the 1960s in an effort to complete the report, but he respectfully declined (Means 2008, 2010). This important manuscript remains unfinished to this day. 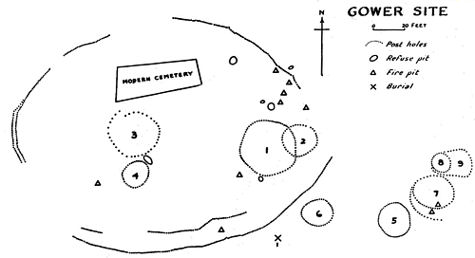 Map of the Gower site. Prepared by Edgar E. Augustine.

All but one of the sites excavated by the Somerset County WPA project discussed in Cresson’s manuscript saw publication in the Pennsylvania Archaeologist in a series of articles by Augustine (1938a,b,c,d, 1940). The exception is the Gower site, and I plan to complete an article on that site–drawing on Cresson’s manuscript and Augustine’s unpublished notes–this summer for publication in Pennsylvania Archaeologist.