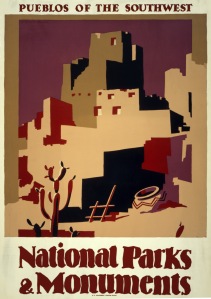 New Deal work relief programs both intentionally and incidentally helped preserve and promote America’s cultural heritage. Today, I picked up a reprinted version of the WPA Guide to Alabama, which was written by members of the Federal Writers’ Project. Many states and even some cities had these guides, which were designed to raise people’s awareness of the nation’s rich history and to promote heritage tourism. Most guides also included discussions of archaeological investigations, though this content varied in its accuracy (Everson 2011).

I strongly recommend that you check out this blog and another that Brent maintains at WPA Today, both of which discuss the history of New Deal programs, and their continuing relevance for Americans today.

The Living New Deal project also emphasizes how New Deal programs have shaped the United States.  The June 2013 newsletter focused on a variety of topics, and included a nice review of Shovel Ready that closed with this comment:

Editor Bernard K. Means restores the rightful place of New Deal in the story of an emerging and evolving discipline in the United States that is yet another example of New Deal initiatives on behalf of public education in its broadest dimensions.

I’m glad that New Deal archaeology is increasingly being recognized for its role in building a broader understanding of America’s cultural heritage.